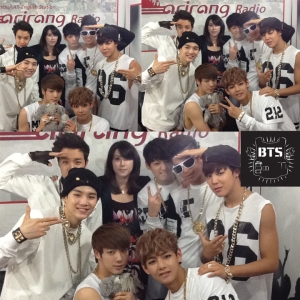 The talented and bulletproof Bangtan Boys were this weeks Hot New Face on Kpoppin with DJ Isak. Bangtan Boys (방탄소년단) is a 7 member idol group that debuted in 2013 under Big Hit Entertainment, a subsidiary of JYPE.

Tidbits::
– Fans have nicknamed Jin ‘Pink Princess’ because he likes pink.
– Rap monster is fluent in English and Korean.
– Members claim that Jimin and V have the most female fans.
– Jungkook takes the longest in the Bathroom
– The group showers 2 times a day
– V talks, screams, and Ask for water while sleeping.
– Rap Monster was part of the Korean underground from 2007-2010 when he became a trainee for Big Hit Ent.
– Jungkook would like to go to Australia, Suga to USA, and V & J-Hop to Japan.

Q & A::
Q: What kind of student were you?
A: Rap Monster – was a good student and got good grades but he had no dream for his life until high school. He says the song ‘No More Dream’ is a message to his younger self.

Q: When did you start to feel like I have to be on stage?
A: Rap Monster – when the textbook stopped looking like something to study and started looking like a place to write lyrics.

Q: When you record songs do you just lay down beats or does the CEO give you songs to use?
A: For title track the CEO usually gives them a song and says have fun with it and do what you want to it. For other songs Suga and Rap Monster will collaborate on the beats and start working on lyrics. Then the other members will bring in their own styles, and just blend it all together.

Q: If you were a girl which member would you date?
A: JIn says Jimin because he thinks it would be fun to tease Jimin since Jimin is so shy and quiet spoken.  rap Monster says J-Hope because J-hope is like the umma in the dorm and Rap Monster thinks he would do that much more for his girlfriend.

Q: How did you get your names?
A: Suga – the CEO said he was pale and sweet so they just went with Suga.
V – was given a voice of 3 names but choose V for victory.
J-Hope – after you open the pandora’s box and everything is gone all that is left is Hope. The CEO wanted him to be the hopeful member.
Rap Monster – he shouted rap monster in a song before debut and then the company just started calling him that. The name just sort of stuck. At first he was embarrassed by the name but now he likes it.
방탄소년단 – bulletproof, because they can withstand all the bullets of negativity and hardships that come their way.