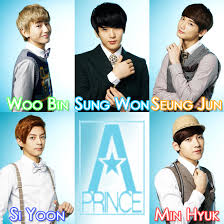 A-prince stopped by the Kpoppin studio as the Hot New Face of the week. A-prince (에이프린스) is a boy-band that debuted in 2012 under New Planet Entertainment.

About the music::
They recently released their 2013 mini album ‘Mambo’. The video for the title track ‘Mambo’ showcases the boys expressing themselves to their girlfriend. It also has actual mambo choreography.

Tidbits::
– The members said that Siyoon is the laziest, eats the most, has the most female umbers in his pone, and has the biggest head (in terms of arrogance).
– Woobin says Seungjun makes him do the most stuff especially when it comes to cleaning the dorm.
– They had a showcase in Singapore right before the ‘Mambo’ album release.
– Woobin said his ideal first date would be watching a movie and eating popcorn.
– Sungwon’s ideal first date would be just having a nice walk through an open park.

Q: What has been the biggest change since you debut?
A: They are not as nervous anymore, and Woobin has become more stylish.

Q: Are there any concepts you would like to try in the future?
A: Something more charismatic, dark, and sexy.

Q: Collaboration you would like to do in the future?
A: Sistar, Jay Rabbit, & Isak

Q: You’ve been wearing different colors for each Mambo show performance. Which color concept do you like the most?
A: Woobin – white
Sungwon – hot pink
Siyoon – blue