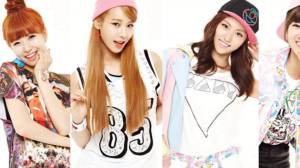 The talented girls of BESTie paid a visit to the Kpoppin studio for Hot New Face with DJ Isak. BESTie debuted in 2013 with debut single Pitapat under YNB Entertainment.

About the music::
‘두근두근 (pitapat)’ was orinially arranged by a foreigner producer and given to the girls as a guide song. The producer had arranged to notes so they were really high even for himself. They song originally had no lyrics and all he did was make weird noises that sounded similar to du-goon-du-goon. The original composition was a faster bpm than their released version. For this video’s concept they showed off both their cute and sexy sides.

Tidbits::
– U-ji is the Umma of the group
– If they have something that’s bugging them they talk about it ASAP
– They have a tough side, that’s honest and doesn’t hold back, and speaks their mind
– The members think Dahye is perfect for variety shows
– 3 of the previous members were in EXID
– U-ji has always looked up to Beyonce
– Haeryung is a child star and has been acting until now. She says there is a big difference between acting on camera and acting on a stage.

Q: Did you chose the name BESTie because of its American meaning?
A: In America bestie means bestfriend; that is what they wanted their name to mean. They also wanted to use the name as a way of being closer to their fans.

Q: Are there any concepts you would like to try in the future?
A: Hyeyeon would like to try a more feminine & laid back concept. Dahye wants to do everything from super sexy to super cute. Dahye also said that they try to match their concepts to something all their fans can be happy with.

Q: Do you have anyone you would like to collaborate with in the future?
A: Epic High, Beyonce, Dynamic Duo, any genre

Q: Are there any male groups that have made your heart flutter?
A: One of the members mentioned G.O.D & DBSK. G.O.D was more like a first love for her and DBSK was a group she fell in love with later.

Live Performance::
두근두근(pitapat) & U-ji did a cover of Beyonce’s ‘If I were a boy’