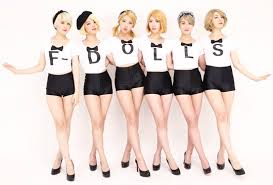 F-ve Dolls (5Dolls) paid a visit to the Kpoppin studio for this weeks Hot New Face with DJ Isak. F-ve Dolls (파이브돌스) is a sub-unit of Coed Education (2010) which debuted in 2011 under Core Contents Media.

About the music::
Their usual music style is Korean Indie Pop. Their current single 짝1호(Soulmate #1) is the first song they have released in 2 years. This song tries to bring bank the Retro Craze with modern retro disco dance moves. 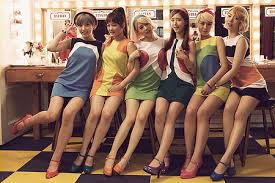 Tidbits::
– All the members act like the mother of the group at random different moments.
– Hyewon was teary eyed when they recieved 짝1호(Soulmate #1) because they have been on hiatus for so long
– Hyoyoung and Seunghee are previous pagent participants
– Nayeon lived in Canada while going to Elementary and Junior High School
– Nayeon lived in downton LA for a few years in college then moved to Chicago for finish college
– Mama Do is an english song
– Soomi a former member of thr group is also a former member of Seeya

Q & A::
Q for the members of the group: Which member do you feel you could learn the most from?
A: Seunghee feels that she can learn the most from Eunkyu, because Eunkyu analysis’ situations from a neutral position and gives sound advice.

Q: What foreign languages would you like to learn?
A: Japanese, English, & Chinese. (in no particular order)

Q for the new members of the group: What is it like working with each other?
A: Eunkyu who is the maknae of the group, is the Sunbae to the new members. They look up to her, and follow her lead in various situations where they have no experience yet.