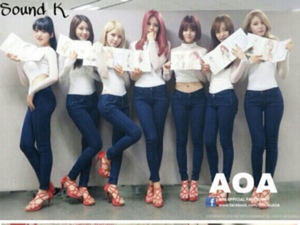 AOA (에이오에이) was this weeks Star Date II in the SoundK studio with DJ SeeAn. AOA (Ace of Angels) debuted in 2012 under FNC Entertainment.

About the music::
Their recently released single album Red Motion features 2 songs. The title song 흔들려 (Confused) has addictive melody and lyrics that are easy to sing along with. It is about having feeling that cause your heart and mind shake. 니꺼내꺼 (you’re mine) is a cute and lovely confession song where the girls are impressively expressing ‘you are mine’. 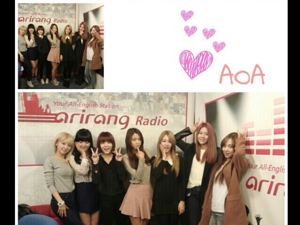 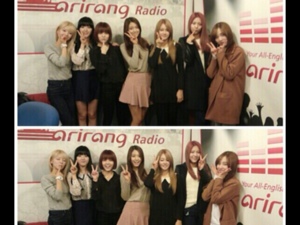 Tidbits::
– They have three sub-units AoA White, AoA Black, and AoA Band
– AoA Black +1(drummer) = AoA Band
– They watched videos from seniors in the industry to get tips on being sexy
– Fandom = Elvis
– They don’t have cellphones
– A male fan arranged a big display of flowers for Jimin
– Yukyung was hurt while practicing for AoA Band, her hand was paralyzed and had to have surgery

Q & A::
Q: What is the most memorable country you’ve visited so far?
A: Singapore because it was their first overseas performance.

Q: Were there any hardships when preparing for 흔들려?
A: Jimin’s sofa always needs adjusting for live performances.

Q: Which country do you want to visit the most?
A: Mina – Japan because she loves Japanese food
Jimin – USA