uKiss was in the SoundK studio for Star Date II with DJ SeeAn. uKiss (유키스) debuted in 2008 as a 7 member boy band. They are now a 6 member group under NHMedia.

About the music::
They recently released their 8th mini album titled ‘Moments’. The album have 7 songs and 1 instrumental. The title track 내 여자야 (she’s mine) is a warning to other to back away from “my girl.” The track is a hiphop song, which is a genre they had not tried before.

Tidbits::
– Kevin thinks Soohyun is the messiest in the group
– When in Korea Soohyun is the main speaker
– Kevin, Eli, & AJ use English when ordering room service when abroad.
– Eli wants to spend Christmas in Fiji
– Hoonmin secretly filmed Soohyun dancing naked at home
– Soohyun took the SAT twice, didn’t like his first score so took it again and got a worse score
– Hoon is on leave from university
– AJ is a student at Colombia Univesity, current take 1 year break
– Soohyun cut his curly hair so he can focus on school studies.
– Alexander & Kibum left the group soon after their debut and were replaced by Hoon and Kiseop
– Dongho left the group in 2013 due to health issues 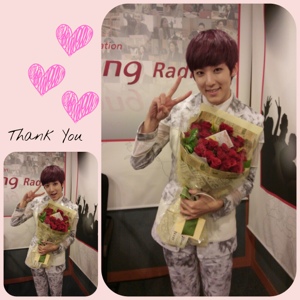 Q: Kevin what do you do in you free time?
A: Ride his bike, go to the river near his home, and just spend time with friends

Q: Which member would you pick to be on you Apocalypse team?
A: Kiseop – Hoon because he is the manliest
Eli – Kevin because he is good at running away

Q: AJ who is the first person you think of in the morning?
A: Mom because he is hungry when he wakes up

Q: Do you remember the biggest fight you’ve ever had with your members?
A: About 2 years ago Eli ate AJ’s late piece of 불고기 (a type of meat). Eli asked if he could have a piece, and then just took it without waiting for the answer. This incident upset AJ.