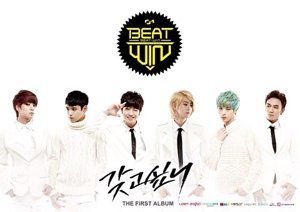 Beat*Win was the Hot New Face in the Kpoppin studio with DJ Isak. Beat*Win (비트윈) is a male idol group that debuted January 7, 2014 under Heavenly Star Contents.

About the music::
Their debut single 갖고싶니 (she’s my girl) is about falling in love and claiming a girl as their own.

Tidbits::
– Sungho’s ideal type is a girl who can take care of him and is understanding
– Yoonhu’s favorite food is ramen, and all the members really like meat a lot
– The members have admitted to checked for their name or group name at least once everyday on the Internet
– Kpoppin was their first radio show since their debut
– Sungho found an article about his showcase picture which shows his abs while searching his name
– The members admit to skipping sleep in order to practice singing or dancing
– If Jungha had a super power it would be to stop time so he can keep longer
– Yoonhu talks in his sleep, he also makes fun of Jungha’s name in his sleep
– Sungho wants to visit any place outside of Korea

Q: What was your first impression of each other?
A: When Sunggyu first saw Sunhyuk, Sunhyuk was very skinny.

Q: What do you remember the most about your showcase?
A: Sungho was asked during a Q&A why he was the only member wearing black pants. He didn’t even realize his pants were a different color until the reporter pointed it out to him.
One member almost took over a part of the dance routine that was not his, but no one noticed his slip up.

Q: Is there someone who want to meet now that you’ve debuted?
A: Sungho – he is a Jumping BoA fanboy and would love to meet BoA

Q: Are there any concepts you would like to try in the future?
A: They would love to do a R&B bump & grind kind of ballad