From the Airport was the Hot New Face in the Kpoppin studio with DJ Isak. From the Airport is a talented male duo that debuted in 2012, and signed under Fluxus Music in 2013.

About the music::
Their first EP ‘Chemical Love’ has 5 songs including album versions of previously released singles. Their debut song Colors is about finding your own color, your own individuallity. Timeless is their 3rd single, and they believe it helped to elevate their standing in the music industry.

Tidbits::
– When writing music they think of the melody first and build around it.
– Milo is the fashionista of the group, zee is always borrowing outfits.
– Zee misses American football, he subscribed to a tv streaming site in order to watch the Super Bowl.
– Milo relieves stress by cleaning.
– Zee’s favorite food is Korean food, and Milo like more Western style foods like steak and spaghetti.
– Zee is fluent in English and Milo knows some English phrases.
– Milo works on OSTs for various TV shows and movies.
– Zee lived in Paris, USA, Canada, & Switzerland while growing up due o his parents always moving.
– Milo thinks Zee’s voice is like gold & has great warmth.
– Their hobbies include video games and movies.
– Milo is good at cooking Spaghetti, and Zee is good at cooking rice & ramen. 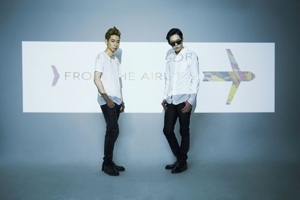 Q & A::
Q: How did you first meet?
A: They met through a mutual friend as Zee was coming out of military service and Milo was returning from Australia. They discovered they liked the same type of music. The first time they jammed together they ended up with the melody for Colors.

Q: Do you have an ideal type? If so what is your type?
A: Milo – feminine and charismatic
Zee- cute, petite, and fair skinned

Q: First impression of each other?
A: Zee was scared of Milo because he had a pony tail and skull rings. He looked like a real hard core rocker. Milo said Zee had no hair. Zee defended himself saying that was because he had just recently been released from military duty.

Q: How did you get your Korean label?
A: The company had heard their music and via the Internet tried to find someone who knew them. They found a mutual acquaintance and she happened to be Milo’s friend. The friend contacted Milo & Zee and the rest as they say is history.

Q: Any countries you would like to idiot in the future?
A: Zee – Africa to see animals and nature
Milo – Ireland