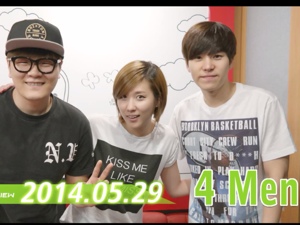 4Men had a star Date in the SoundK studio with DJ Stephanie. 4Men (포맨) is a male duo that debuted in 1998 as a three member group under YWho Enterprise, and Happy Face Entertainment.

About the music::
Their recently released album, 1998, has 3 title tracks: 지우고 싶다 (Erase), 예쁘니까 잘 될 거야 (Pray), and OK. “지우고 싶다 (Erase)” is about wanted to get rid of a certain person, but knowing you can’t remove them from your life. The video for Erase was filmed in Taiwan. “예쁘니까 잘 될 거야 (Pray)” is about being lucky because you’re beautiful even though you’ve gone through a break-up. It is literally saying pretty girl, you’ll be fine. 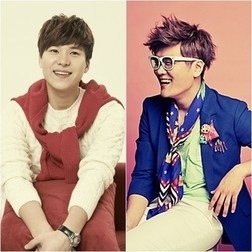 Tidbits::
– There used to be 3 members in the group
– Yongjae got into 4Men on his very first audition
– According to Yongjae Wonju can dance
– Wonju likes to have eye contact while talking
– Yongjae is a bit shy
– They like girl groups with sexy concepts like Girl’s Day and AoA
– For a TV show Yongjae played basketball on a team with New Kids on the Block
– These days they both like the color black
– Yongjae has a wheezy laugh (A/N: I think it’s cute)

Q: If you switched bodies with each other for a day what would you do first?
A: Yongjae – go clubbing and dance as Wonju
Wonju – will sing in high voice all day as Yongjae