Block B was in the SoundK stuio for a Star Date with DJ Stephanie. Block B (블락비) is a boy band that debuted in 2011 and is currently under Seven Seasons.

Tidbits::
– U-kwon is known as Jesus Oppa, because of his “Jesus” line in one of their songs
– They are so busy that they dont get much sleep, so they catch caps in the car and while getting hair and make up done
– If Jaehyo doesn’t eat he gets very sensitive and starts bugging their manager a lot
– They don’t have much free time and when they do they use it for sleeping
– Jaehyo has to eat before a live show or he can’t sing
– B-bomb has to warm up his voice before going on stage
– U-kwon gets very nervous before shows and starts giving his members kisses
– Jaehyo likes barbecue 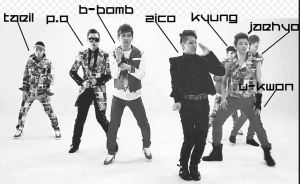 Q: When you see a girl you like how do you approach them?
A: Jaehyo – he just approaches the girl and starts a conversation
U-kwon – takes time to see the real person before he confesses
B-bomb – he goes on some dates with the girl and hangs out with her and gets to known her before he decides to confess or not to confess.

Q: Since it is Arirang Radio’s 11th birthday, we should ask if you remember 11 years ago?
A: U-kwon – wanted to be a b-boy, after coming across a particular book about hiphop
B-bomb – was 13 and his idol of the time was Rain (Bi), and he wanted to be a singer because of him.