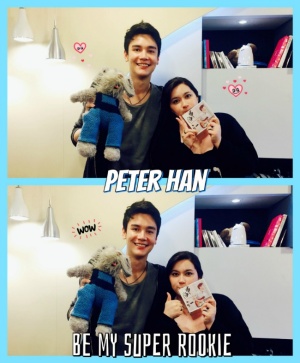 Peter Han was in the Kpoppin studio for Be My Super Rookie with DJ Isak. Peter Han (피터 한) debuted in 2017 under Movement Generation (무브먼트제너레이션).

Tidbits::
– He was on Kpop Star, an audition survivor show in 2014.
– Peter Has been declared a healing voice by DJ Isak.
– His real name is Gallaun Peter Hyun.
– He has already served his mandatory military duty.
– Peter was on the national professional youth team for Skiing and Soccer.
– He is half Korean half Mexican.
– His mom is an opera singer, his dad is part of an orchestra.
– Peter would like to learn the drums.
– His mom bought him his first guitar.
– All the guitars in his ‘Sing With the Swing’ MV are his.
– He has 12 guitars.
– Peter loves Christmas music, and doing covers of Christmas songs.

Q & A::
Q: Did you ever take guitar lessons?
A: He took about three classes to learn the basic guitar notes and cards that can be played to all pop songs. Other than that he taught himself guitar. When he first started playing the guitar he went straight to trying to find the chords needed for the song in his head that he wanted to write.