Stella Jang was in the SuperKpop studio for Kpop Rising with DJ Sam. Stella Jang (스텔라장) debuted in 2014 under Grand Line Entertainment (그랜드라인엔터테인먼트).

Tidbits::
– She speaks Korean, English, French fluently. She only speaks the very basics of Spanish, Chinese, German.
– Her real name is 장성은 (Jang Sung Eun).
– She started music because she was a big fan of Big Bang.
– The pink hair was a suggestion from her company that’s he went along with.
– Stella gets inspiration from the very basic details of her daily life, such as riding the bus, or being at home doing nothing.
– She would like to try songs that are more emo, and songs where the music and the lyrics match (sad,with sad, happy with happy).
– She considers 그대는 그대로 (You as you are) to be special to her because it was 100% her and what she wanted to hear.
– Stella her up and down moments, and her mood can swing suddenly.
– 그대는 그대로 (You as you are) was written as a way to tell all the people expecting things of her, and telling her how to live her life to let Stella be Stella.
– She has 2 cats and she’s had them since 2015 because she wanted a pet in her home. She had to convince her parents to allow them. Together their names are Elegance. One cat is Ele, and the other is Gance.
– Her idol is 이적 (Lee Juk), and she would like to collaborate with. 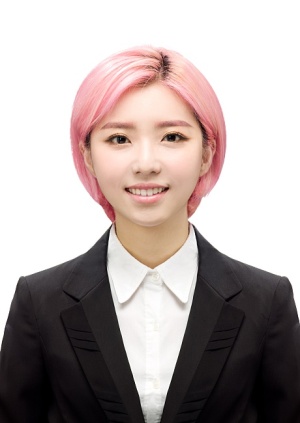 Q & A::
Q: Please tell us a bit about your new song?
A: It was a hidden track on the v app from a project that was between Musicians League, Naver, and the V app. 그대는 그대로 (You as you are) is about a constellation, and was written during a time in her life when she was struggling with her future. She wanted to get back up again.

Q: What can you tell us about 월급은 통장을 그칠 뿐 (vanishing paycheck)?
A: It’s about her time working at a French company in Korea. It’s a time she like because there were no late nights for her, and she was able to speak in three language regularly.

Q: What is Alright about?
A: It is a breakup song and is about a girl who says she is alright after everything is said and done.