Vanilla Mousse was in the SoundK studio for You Who Came from the Stars with DJ Leah. Vanilla Mousse (바닐라무스) is a co-ed group that debuted in 2015 under Keiz Entertainment (케이즈 엔터테이먼트). 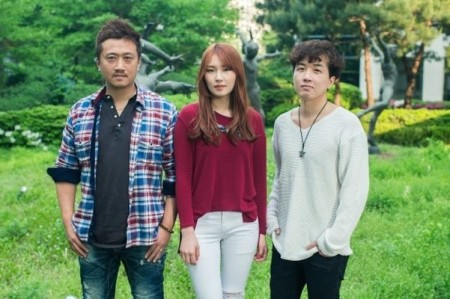 Tidbits::
– Sungho is the project manager for their management company.
– Jinhwan considers himself the visual if the group.
– Jinhwan is a professor.
– Arim takes care if them when their drunk.
– They had their first concert on an April fools day. not many came. mainly family and friends.
– Jinhwan used to get embarrassed when he searched his name and he was the first Jinhwan to show up. Now since iKon, he is not at the top of the list so he feels relieved.
– Arim would buy games with ₩ 3000.
– They would sell rather eat only sausage for a week than only apples.
– Jinhwan would like to have an RV in the dessert.
– Arim has been learning kickboxing lately.

Q & A::
Q: How did Vanilla Mousse become the team name?
A: They were drunk one night and saw one sign that said vanilla and another that said mousse. So that is what they went with.

Q: Please tell the listeners about this song (Regret)?
A: Regret is about those times when you breakup with someone and see them again later and you get this pong in your heart where for a moment you regret what happened.