Tidbits::
– When making music two or three people will write the song and lyrics and bring to the group. Then as a group they have practice sessions where they create demos, and then go from there.
– They would like to do a world tour and finish it in Korea.
– They all met as friends of a friend of a friend. Chulho, Hyunkyung, and Youngkwang were they original members and then Gre, Kiwon, and Jinsung joined later.
– Kiwon is the most sensitive according to the members, but he doesn’t agree.
– Chulho would like to work with a hip-hop artist, specifically BY a rapper from ‘Show Me the Money’.
– Kiwon can almost always be found with coffee in hand. If its a hot day he can’t eat red foods. Plus he has issues with spicy foods. 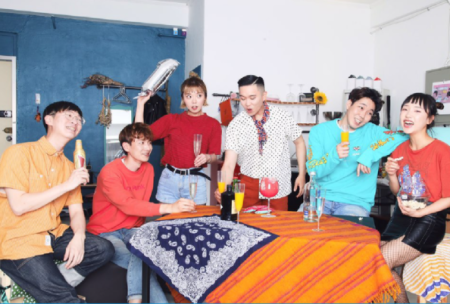 Q & A::
Q: Please explain you team name, Oriental Showcus?
A: They have an oriental feel with a blend show and circus when they perform.

Q: What are your promotion plans?
A: They have lots of festivals coming up to promote their current album. They are working to release another album next year.

Live Performance::
What Happened? & Swing With Me