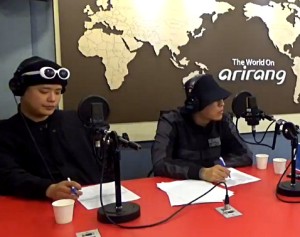 Tidbits::
– They met via the Internet and became best friends.
– Gento was born in Italy.
– Young Cream was in high school when he started rapping.
– They don’t watch a lot of Hip-hop survival shows.
– Young Cream posts lots of his childhood pictures on SNS because he thinks he was cute.
– They can tell how the other is feeling just by looking at his face.
– Gento still has issues with figuring out how to address people when he meets them.
– When asked if they could ever do a diss battle with each other they said “No,” because they know too much about each other.
– Young Cream says Gento’s hidden talent is his Italian skills.

Q & A::
Q: How did you come up with Surfin’?
A: Gento was in the studio with a friend who makes beats, and he liked the way it sounded. Gento started playing around with a song and that’s how Surfin’ was born.

Q: How did you get a chance to attend the Grammys?
A: Young Cream’s CEO knew someone who works with the Grammys. That’s how he got invited to the Grammys. It was a very eye-opening experience for him.