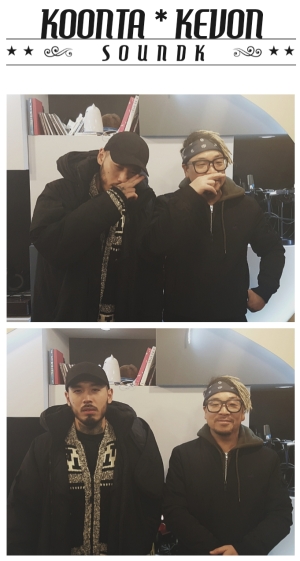 Koonta was in the SoundK studio for You Who Came from the Stars with DJ Leah. Koonta (쿤타) debuted in 2006 is currently under AAP (에이에이피).

Tidbits::
– His real named is Ahn Taehyun (안태현).
– He is a member of Rude Paper.
– If he were not in music he wants to be a cook.
– He reached #1 on the Naver search engine. His friends say he bragged about and asked them to keep searching his name.
– He would like to be on SNL Korea, but they just finished their last season.
– The song he did with Skull is not playable on Arirang Radio because it is not PG13.
– As long as TV programs don’t put him in spandex he is willing to be on the TV show.
– He memorized ‘No Woman No Cry’ and says its the only song he knows how to do in all English.
– He loves SpongeBob.
– He like Kang Mina. He also likes the cold looking girl.
– He wants to go to Australia because there is a tattoo Artist named Emily Rose. He wants to get a tattoo by her on his thigh.
– He loves Jamaica but would stop people from going there because the Jamaican accent is so thick it’s hard to understand them.

Q & A::
Q: What’s it take to get you to feature on a song?
A: He only has two options if you want him to feature on your song. Be very close friends, or pay him.

Q: Do you have any tips for ramen?
A: He says to make the sauce and cook the noodles in separate pots. After the noodle are done drain them and run them under cold water before adding them to the sauce/soup. He says this gives the noodles a crispy taste.

Q: How did you end up working with Skull?
A: At first Skull and Koonta didn’t want to work together because they are rivals. Skull gave in to the producers first and said: “let’s just do it”. Skull took him to a restaurant that had a very good fish dish. After tasting that dish Koonta decided “OK I must work with him.”

Live Performance::
No Woman No Cry (Bob Marley cover) & A song he Freestyled
Accompanied by Kevon on guitar