Fromis 9 was in the Kpoppin’ studio for Be My Super Rookie with DJ Kate Kim. Fromis 9 (프로미스나인) debuted in 2017 under Stone Music Entertainment. 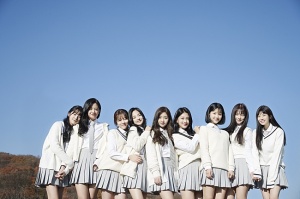 Tidbits::
– Fromis is an abbreviation for From Idol School.
– Their debut stage was for he MaMa Awards in Japan.
– Jiheon, Chaeyoung, and Hayoung are the best at impersonations.
– Nakyung has the most aegyo. She shares a room with Saerom, and say she sees hidden aegyo come out of Saerom.
– They practiced over 10 hours a day for two months to prefect the choreography for 2Heart. The choreography was changed at least 10 times in order to make it better.
– Seoyun has memorized all the members birthdays.
– Jisun is the best at cooking, and is responsible for meal times.
– Hayoung eats very cutely, like a hamster/squirrel.
– They are big fans of Energy, and like the song he wrote: Glass Shoe. They thought he was very nice when they met him.
– Saerom wants to have Nakyung’s aegyo, because she is very shy and envies Nakyung’s ability to be sociable with aegyo.
– Jiheon looks the prettiest without make-up. They can’t rarely tell the difference between make-up and no make-up with Jiheon.
– Chaeyoung wants to Hayoung’s wardrobe because it’s full of Hiphop style clothes. Chaeyoung loves Hiphop clothing.
– Saerom is probably the best an the acronym game.
– They have something they call 약속해(promise) where they socialize with their fans via SNS.
– Chaeyoung loves chocolate. She even dips chocolate in chocolate.
– Seoyun is good at find where cameras are located.
– Gyuri thinks Seoyun has an alter ego that comes out when she’s on stage.
– They love 소녀시대 (Gil’s Generation) and would like to meet them. They also have girl crushes on 현아(Hyuna) and want to meet her.

Q: What was your reaction to 2Heart when you first heard it?
A: They really liked the song, especially the violin intro.

Q: What is your favorite song on the album?
A: Nakyung – ‘Be With You’ because it’s dedicated to the fans.