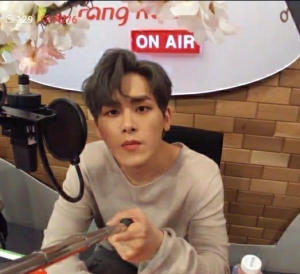 Hoya was in the Kpoppin’ studio for Be My Super Rookie with DJ Isak. Hoya debuted in 2010 as a member of Infinite (인피니트). Hoya made his solo debut in 2018 under Glorious Entertainment.

Tidbits::
– Hoya’s real name is Lee Howon (이호원).
– The people he works with started to ignore him, when get got closer to the album release date.
– He’d like to collaborate with DJ Khalid.
– When it comes to first impression, he is thinks he is kind of good at reading people’s future behavior based on the first impression.
– His album was released on his birthday (3/28).
– It usually takes him a while to learn choreography, because he has to dissect the choreography to get a geniune feel for the dance and the music.
– If he was a super hero he would be Thor.
– Hoya really enjoys his album. He didn’t make it to sell millions. He made music that he likes to listen to, which is what he and NiiHWA decided they were going to do from the beginning of working on the album.
– When they were working together, their styles are completely different. Hoya changed his style to match NiiHWA (니화) for the Shower album, because he loved his music.
– Hoya is a perfectionist.
– For the Angel video he wanted it to be a one shot video. He came up with the choreography himself. He wanted the cameras to move around him while he danced.
– They re-recorded the song, All Eyes on Me, 4 or 5 times over 8 months.
– Hoya thinks he is very good looking when he gets out of the shower.
– He would like to do a thriller type of movie as a guy who is not very smart but strong and kind of a bad boy.

Q & A::
Q: Can you explain why the album is called Shower?
A: When he showers it’s just himself stripped down, no make-up, no fancy clothes. He wanted to bring that to the album, and say this is me. That’s why he named it shower.