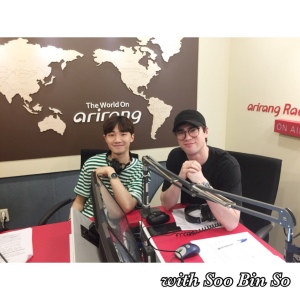 So Soo Bin was in the SuperKpop studio for Music Stage with DJ Sam. So Soo Bin (소수빈) debuted in 2016 under Magic Strawberry Sound.

Tidbits::
– His real name is his stage name. He thought of Yin (hero from a game he used to play) as a stage name, but decided to use his own unique name.
– People who are comfortable with him call him Sobi.
– Sweet Nothings is a song that is sweet and a little bit cheesy, with a feel of sharing little messages to just meant for you and your special someone to hear.
– Soobin post covers on YouTube but the location he plays at as meaning to him or his co-workers.
– He acted as a couple in his music video. He. found it very awkward and realized why professional actors are professional actors.
– Soobin loves playing play station games.
– He would like to do a collaboration with Jung Eunji from A.pink. They are both from Busan and a friends.
– Soobin would like to become better at a specific studio effect for echoing himself. He thinks SHINee’s Taemin is good at it.
– He started playing guitar when he was in high school (with lots a breaks of no playing), wanted an instrument that could accompany his voice while he sang.
– He would like to try confessing his love for someone through music.
– Soobin taught himself to play guitar using video he found on the internet.
– He would like to learn how to play the piano.
– Oh I, is a song asking for love. it is his debut song.

Q & A::
Q: What kind of song is 자꾸만, 너 (You, again)?
A: It’s a very special song to him, because it’s the first song he released himself outside of his label.