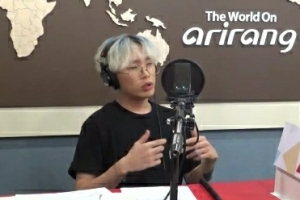 Woodie Gochild was in the SoundK studio for You, Who Came from the Stars with DJ Ashley. Woodie Gochild (우디고차일드) debuted in 2017 under Higher Music Records.

Tidbits::
– His real name is Kwak Woojae (곽우재).
– Woojae made it to the top 20 on Show Me The Money 6.
– He really likes Woody from Toy Story.
– He wanted his diss rap battle was not negative, because he didn’t want anyone to feel insecure he made his diss rap funny rather than mean.
– Woojae recently released his first EP #GOCHILD.
– He has a tattoo of Michael Jackson on his arm. Woodie says Michael Jackson is his muse.
– His signature sound is the pigeon noise.
– When people listen to his songs he wants them to be like a business card for him (“This is Woodie Gochild”).
– He was an aspiring Vocalist and into neo-soul music, before entering the rap and hip-hop scene.
– ‘Fly me to my town’ was written not long after he came to Seoul, and was really missing his hometown. 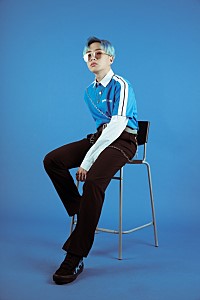 Q & A::
Q: How did Woodie Gochild become your stage name?
A: It’s comes from indigo child (someone from out of this universe) + the Woo from his real name (also from Toy Story main character Woody). He wants to stay young at heart forever like a child.

Q: What is the biggest lesson you’ve learned from SMTM 6?
A: Before show me the money he was lazy about doing anything. After being on the show he made a complete change, because he realized the prize of hard work and the benefits from being on the show.