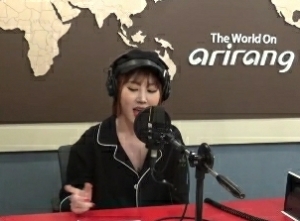 Jimin ‘Jamie’ Park was in the SuperKpop studio for Music Stage with DJ Sam. Jimin Park (박지민) debuted in 2012 as a member duo group 15& under JYP Entertainment.

Tidbits::
– She lost weight during the two years since her last album.
– Jamie had her tonsils removed, and there were complications during the healing process which made her voice lower and more husky.
– She stays in contact with Yerin (백예린). They send each other messages of encouragement.
– The songs that she composed on the album are her life story.
– Jamie would like to making a MV for 전화 받아 (Pickup the phone).
– Jamie’s original dream was to become a swimmer, before becoming a singer.
– She loves 떡볶이 (spicy rice cakes).
– She watches YouTube reactions. She especially mentioned Jre from JREKML.
– Jamie would like to collaborate with Spray Kids Changbin, because he is a rapper and she has no rap skills. She tend to have crushes on rappers.
– Jamie lived in Thailand at one point in her life, and grew up there.
– She has been trying to bake, but people says she should stick to singing.
– She doesn’t think about going back to school. If she had to go back she probably study something related to math.
– Her lucky color is green.
– Meeting her fans are meaningful moments for her.

Q & A::
Q: What is Apirl Fools about?
A: For Jamie, April Fools is a day where people can be honest about their feelings. It’s about a past relationship where the she could tell the guy wasn’t being honest, and she was telling him goodbye.