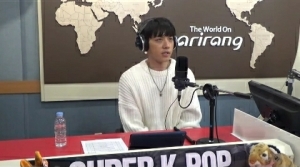 Tidbits::
– He was on season 5 of 너의 목소리가 보여 (I Can See Your Voice).
– Chae Eon likes the feeling of music being his job and not just something he does for fun.
– He’s a perfectionist, even though he gets a lot of compliments about his music he still thinks about things he could’ve done better.
– Before being on he was working a part time job working in the JYP parking lot parking cars.
– The skin around his eyes is noticably darker than the rest of his face, and people are constantly asking him how he feels and if he is ok.
– ‘기억이란 기적처럼’ was his first doing a song for an OST.
– His debut song ‘우울한 습관 (habit of feeling down)’, which looking back he feel half good half bad about.
– The first foreign artist concert he went to was a John Legend concert.

Q & A::
Q: What meaning does ‘화인 (like a flower)’ have for you?
A: It’s a song about what’s left behind after a breakup, and the feeling of loneliness.