ONEWE was in the SuperKpop studio for Music Stage with DJ Sam. ONEWE (원위) debuted in 2017 under Rainbow Bridge World (RBW). 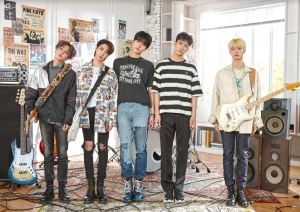 Tidbits::
– Ring on my ears was written by Kia, and was inspired by a time when he was jumping rope and his ear piercings kept hitting the side of his face.
– They were very excited and nervous when their debut was decided.
– My way is meant to show each member’s individual color.
– Yonghoon hopes Onewe becomes the keyword that describes them the best.
– 1/4 is the start of a musical saga, and will be followed by 2/4, 3/4, and 4/4 (at least that’s the current plan).
– The member who gets sulky the easiest is Dongmyun.
– Dongmyun was scared if Harin when they first met, but Harin turned out to be a nice person.
– If Harin was an animal he’d like to be a tiger. Dongmyun called himself a rabbit, because he’s scared of the tiger.
– 0&4 is a song about a one-sided love.
– They have done a cover of Blackpink’s ‘Kill this Love’ done in Onewe style.

Q: What is the meaning behind the album title, 1/4?
A: It’s the start if a new journey.