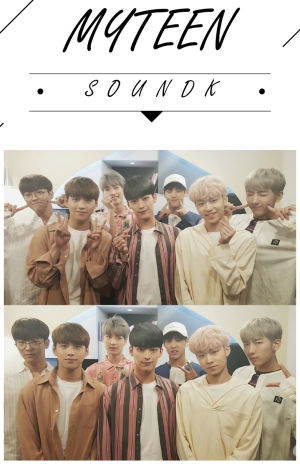 MyTeen was in the SoundK studio for You Who Came from the Stars with DJ Leah. MyTeen (마이틴) is a boy band that debuted in 2017 under The Music Works (더뮤직웍스).

Tidbits::
– The average age for the group is 19.
– Taevin and Hanseul speak almost fluent English.
– Yuvin was on an audition program.
– Xiheon was born in a very famous hospital in Gangnam.
– Junseop like corn snacks.
Chunjin likes watching movies.
– They paid attention to their airport fashion when going to their fan meeting in China.
– Xiheon is afraid of insects and the dark.
– All the members are afraid of insects.
– Their role model is 신화 (Shinhwa).
– The troublemaker of the group is Junseop, because it’s very hard to wake him up in the morning.
– Yuvin has orange slippers, and has had since 7th grade, and he still wears them.
– Taevin was considered a kid genius for 6 six years, because his IQ was 142 when he was little.
– Chunjin likes 제육볶음 (Jeyukbokkeum / spicy pork stir-fry), but he’s not good at eating spicy foods, but 제육볶음 is okay.
– Hanseul and Yuvin both wanted to play baseball, and sometimes they will go out together and play.
– Chunjin was really into the H brand which were the shoes with wheels that all the cool kids had.
– There is a popular corny saying that involves 짜장면. 짜장면 is a Korean-Chinese ramen and pork dish that is typically eaten when you’re bored.
– 짜장면 is the name of their song for the fans.
– Yuvin and a friend were in a competition and won 500 Won.

Q & A::
Q: What does the name mean?
A: The name is MyTeen because they are going to take charges of the teens. Even when their older, and listeners hear their music it will ‘make you (into a) teenager.’

Q: Are there any pre-debut episodes that you remember?
A: They learned to not go in water in the winter time, because they were so cold the managers had to piggie back them to their next destination.

Q: Have you thought about having a fan-club?
A: They want to form a fan-club with the name Manhitu (**might be spelled wrong**), meaning they want to take care of their fans without them knowing.

Q: Do you feel that you are famous?
A: Hanseul says they can’t hear their music at performances, because the fans are so loud. They are just basking in their new found fame.